Walking in the footsteps of St Francis of Assisi

It was a call to the soul that brought me to the sanctuary of San Damiano, hidden in the hills of Assisi in the picturesque Umbrian countryside. A simple place which speaks to one in a silence that you can listen to.

For it was here that St Francis received his calling to serve humanity. It was also here that I was inspired to set up an organisation dedicated to serve the most vulnerable in society just like St Francis and his followers did. SD Care Agency is the trading name of San Damiano Corporation Ltd.

The following article by Liz Boulter of the Guardian provides a secularist’s perspective of this journey that I took several years ago i.e. walking in the footsteps of St Francis of Assisi except that for me the spiritual dimension was more profoundly felt. She describes him as the world’s first environmentalist and was captivated by the sheer beauty of the natural landscapes that he so loved.

Walking in Italy: on the trail of Saint Francis of Assisi

Alessio Patron – A View from the hills, Assisi – Italy

Holy ground … Assisi, birthplace of Saint Francis. We follow a route through the green hills of Umbria walked 800 years ago by the ‘first environmentalist’ – but swap prayer and poverty for soft pillows and handmade pasta

Peace, universal love, respect for the natural world… Francis of Assisi, the “first environmentalist”, is the sort of saint whose teachings even the most ardent secularist couldn’t object to. His celebration of simplicity and rejection of material possessions also chime with today’s distaste for heedless consumerism.

Nearly 800 years after Francis died, husband and I – ardent secularists both – are following in (some of) his footsteps, through the western Apennines on a trail the Umbria tourist board is refurbishing and promoting – the Via di Francesco, a 550km route from Florence to Rome on paths the saint would have used.

We’re doing around 110km in six days’ trek from the ancient hill town of Assisi to Piediluco near the Lazio border. We have in the past enjoyed walking holidays where our luggage was magicked ahead each day, but now can’t square that with another concern that Francis would have shared: carbon emissions. 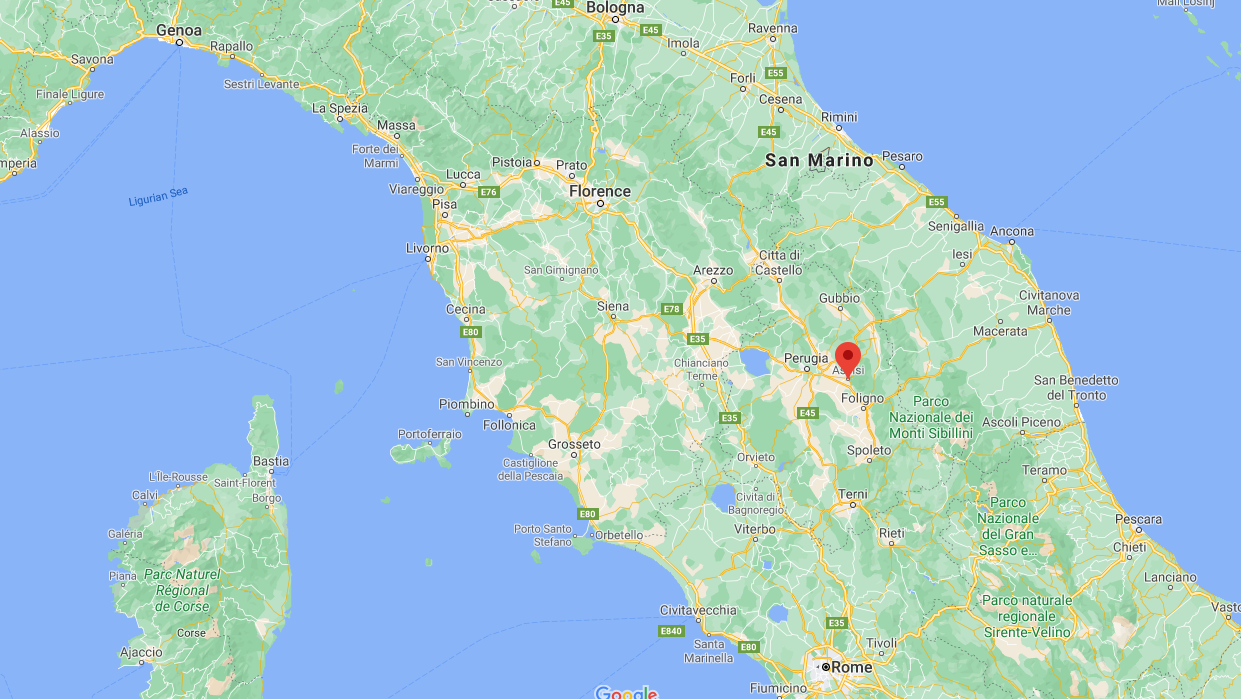 Assisi on a map

We’ve come to Assisi by train, so it would seem mad to have someone drive the route each day with our bags. I’m also masochistically keen to try a more “authentic” trekking style, so before we set off I do some rigorous decluttering – though I’m thinking less of Marie Kondo and more of my back.

Francis possessed only a robe, staff and girdle. We have a rather less saintly small rucksack each: spare shorts and T-shirts, minimal toiletries, sun cream, phones for GPS and podcasts, and Sandy Brown’s guidebook to The Way of St Francis (Cicerone, £16.95). The saint gave his stuff away to the poor but we leave our other possessions at the hotel. The heaviest thing we carry is drinking water, which naturally gets lighter as the day goes on.

Josh Applegate, Climbing up the steps of picturesque Assisi in 30°C heat was well worth it for this beautiful sunset shot.

But Umbria, with its mountainous terrain and medieval hill towns, offers some of Italy’s best walking and we’re looking forward to quiet paths, ancient forests, clear streams and stunning views.

Francis was born Giovanni Bernardone in 1182 – he was nicknamed Francesco (Frenchy) by his wealthy merchant father because his mother was from Provence – and lived a carefree upper-class life until his mid-twenties, when a vision led him to choose prayer and poverty. He took to escaping Assisi to meditate and preach in the mountains and gathered such a following that in 1209 he was summoned by the pope to explain himself. The route he and a band of friends took to Rome is the basis of the Via di Francesco.

If Francis found 13th-century Assisi a distraction from spiritual life, he’d be shocked to see it today: its mellow streets lined with gift shops and thronged with tour groups. Nevertheless, when we make an early start the next morning, the peace is broken only by sounds he would have heard eight centuries ago: birds, cicadas and the faint singing of nuns.

Brown’s book divides the trek into stages of up to 20km, and for our first day there’s a choice of “easy” and “hard” routes: the latter is 4km longer and involves nearly 1,000 metres of ascent. Feeling we may as well start on the path of virtue, even if we later fall by the wayside, we set off up steep trails, following blue-and-yellow waymarking to a hermitage, Eremo delle Carceri, in a steep forest gorge on the slopes of Mount Subasio, where the saint came seeking beauty and solitude. There’s a sprinkling of visitors (they’ve come in minibuses, ha!), but its small monastic buildings and a chapel used by Francis still have a peaceful feel. 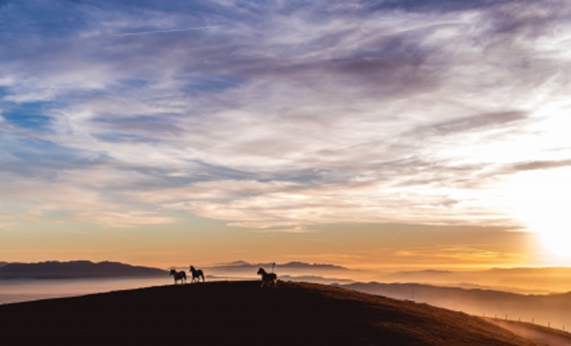 Descending in late afternoon on slippy gravel paths to the pre-Roman hilltown of Spello is almost as hard as the ascent. Francis would have offered up his suffering; I just offer some ungodly expletives.

Not every day is as demanding, but as we are walking the Appenines’ western edge, it’s all descending into valleys then climbing ridges for eye-popping views west across the wide Valle Umbra. Each day we stop around noon for a picnic (and a snooze for someone) – in an olive grove, a forest clearing or a high meadow strewn with wildflowers. 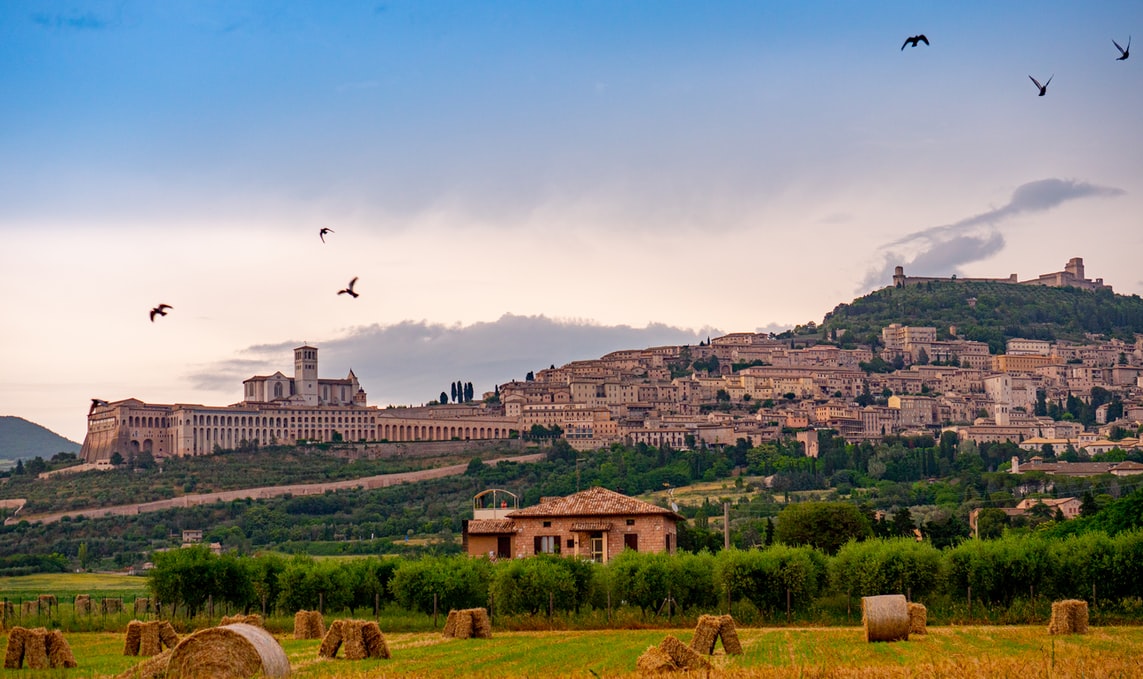 Monique Kraan, One of the most magical places in Italy 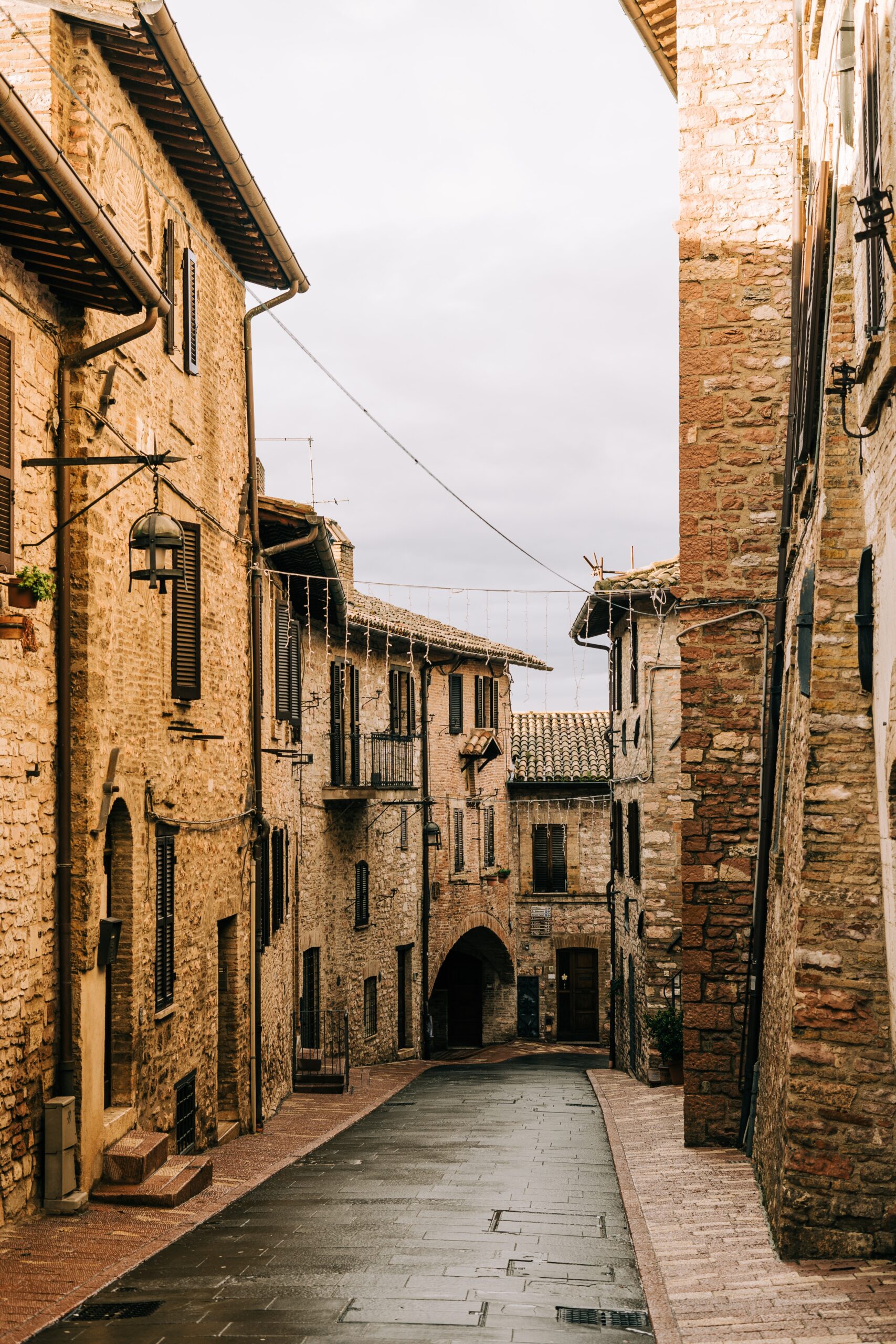 Gabriella Clare Marino, A medieval street in the town of Assisi, Umbria, Italy, the birthplace of St Francis of Assisi

I went to a convent school and share Dave Allen’s “gestapo in drag” view of nuns, but the four who live at Eremo delle Allodole (Skylarks), which we come to up a steep path south of Trevi, are nothing like that. In her simple blue dress, thirtysomething Sister Lucia, who answers our ring at the medieval bell, is smiling and non-judgmental, interested to hear about our London lives.

This is an ancient Christian site, founded by missionaries from Syria who stayed in caves here in the fifth century – as, later, did Francis himself. The caves, reached down steps below the chapel, look comfortless to us, but – with their year-round 15C temperature – would have been a refuge from icy winters and summer heat.

As Lucia is talking, a butterfly lands on her arm and stays as if listening – and I think fancifully about Francis preaching to the animals. Leaving to head up the valley, I notice that the birdsong here is especially loud … 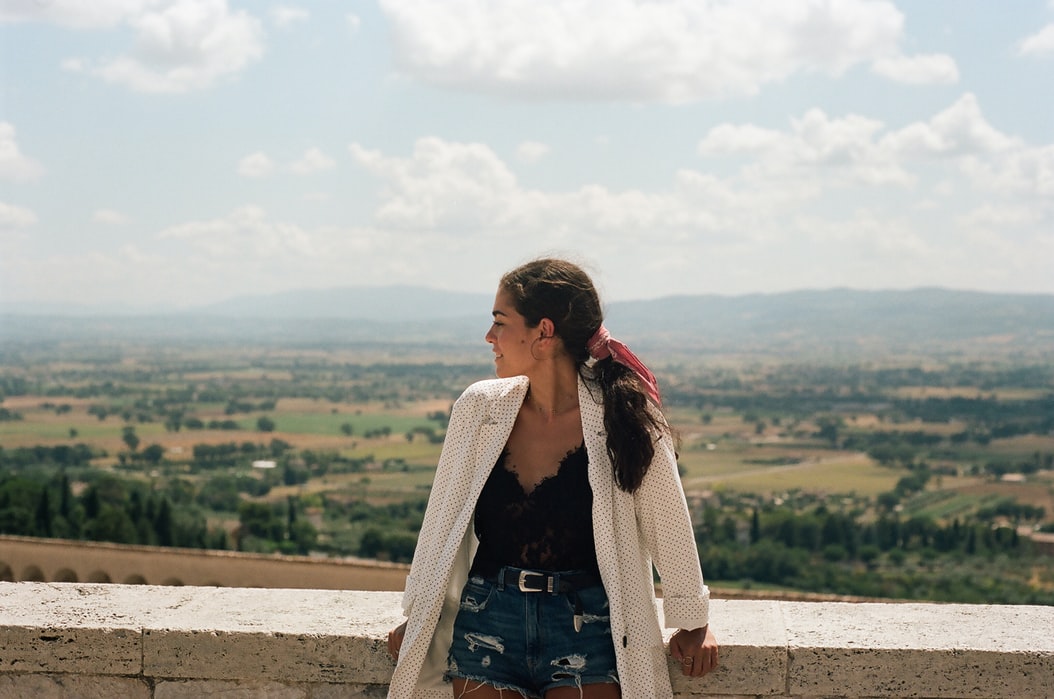 Tiny Hostaria de Dadà in Spello offers food Francis might recognise: traditional flatbread made with lard, flour and water – hot from the pan; chickpea soup; spelt ravioli. The best food of the walk, though, is at Antica Dimora Alla Rocca in Trevi, where a starter of pear and pecorino tart topped with pepper, honey and hazelnuts is followed by homemade tortellini in cream sauce. Massive calorie count but, hey, tomorrow holds some stiff climbs.

When you’re travelling light, every item in your rucksack is there because it’s vital, and losing anything is a blow. On a windy evening one of my only pair of hiking socks is swept off the windowsill where I’ve put them to dry – and I mount a desperate search until I locate it way across the piazza. A day later I realise – as I step out of the shower, hair dripping – that I’ve left my hairbrush somewhere. It’s another two days before we get to a village large enough to have a shop that sells me a comb, but in desperate times, it’s amazing what can be done with a toothbrush. 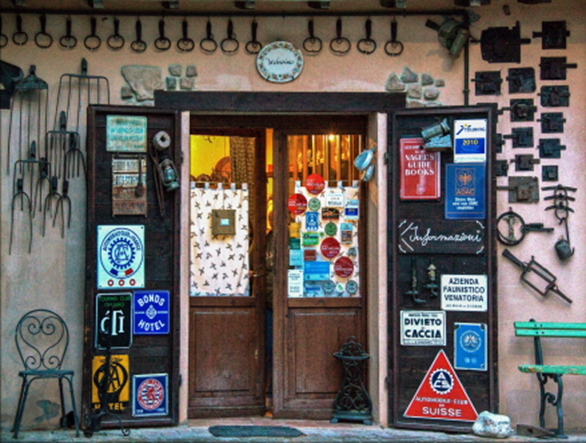 We swap uplifting thoughts for more down-to-earth concerns each evening though.

While there are pilgrims’ hostels and bothy-type spaces along the route, we’ve booked hotels – for hot showers, a comfy bed and somewhere to wash our socks. And while Franciscan brothers lived by begging scraps, we use the excuse of high energy expenditure to fill up on tasty Umbrian cuisine.

There is something especially satisfying about a long-distance trail – the sense of steady progress, the changing scenery, a different town or village each night. The steady march of our feet becomes meditative, and as it’s just the two of us at large in the landscape, husband and I find it a bonding experience. We appreciate each other’s strengths: I’m faster going up hills; he’s more sure-footed on descents and has a better sense of direction. And we encourage one another when the going gets hard, as when we reach Poreta after a long day of ups and downs, and I indulge in more sinful swearing when we find our hotel is on a crag another kilometre above the village.

As with the Camino de Santiago, this is a trek done as much by non-believers as religious types. We meet a group in hills above Ceselli who are actually carrying a cross and have a beatifically smiling monk among their number, and I take a close look at a signed letter from Francis in Spoleto’s Duomo, but in general we keep religion at arm’s length.

That’s partly because there’s so much more to enjoy: dizzying views where we cross a ridge above the steep Nera valley, the crashing majesty of the Marmore waterfalls near Terni, the alpine loveliness of Lake Piediluco. Rather than just admiring the wooded hills of Italy’s “green heart”, we are spending long hours walking among them, letting their natural glories fill our senses.

Which is pretty much what St Francis’s message was all about.