“Keep a clear eye toward life’s end. Do not forget your purpose and destiny as God’s creature. What you are in His sight is what you are and nothing more. Remember that when you leave this earth, you can take nothing you have received, but only what you have given; a full heart enriched by honest service, love, sacrifice, and courage.”

At its core, SD Care is committed to provide care that is deeply personal and compassionate, recognising that every patient’s ordeal is much ours as his or hers.

We abide by the following truths:

Flexible and accommodating
“I chose SD Care to provide personal care services for my father because of their Franciscan philosophy and I was not disappointed. They were flexible and accommodating, working with the family as his needs changed and so enabling him to stay in his own home. The staff provided a good level of care and became friends to him. I would highly recommend SD Care.”

A new life – thank you SD Care
“My carers are much more than health care assistants to me, they are my eyes, my legs, my arms and my ears. Due to my deteriorating mental health, I used to be forgetful and tended to feel lost and disorientated all the time. Thanks to SD Care, I don’t have to worry anymore about my physical well being, they do everything for me! All I have to do is focus on my recovery and on finding some peace of mind.”

At SD Care we run our business by prioritising the needs of clients and staff using a healthcare model that is based on providing compassionate care with maximum business efficiency. We work to high quality standards and leverage on information technology to automate business processes. We firmly believe that quality, technology and innovation are the key drivers of productivity. The ethics of our business are based on the belief that the maximisation of shareholder wealth is not the best or only way to optimise resource use. Instead, our objectives are directed at improving the human condition and the environment in everything we do. To this end, we have dedicated our cause to contributing as much of our earnings as possible to humanitarian causes. One such cause we have identified is the support of the work done by Carmelite missionaries in the Central African Republic.

But what is the inspiration behind this model? …

“St Francis of Assisi taught me that there is a wound in the Creation and that the greatest use we could make of our lives was to ask to be made a healer of it.”

“A single sunbeam is enough to drive away many shadows.”

Footsteps of St Francis – The Inspiration

“I felt a burning need to bring back with me a memory of the sense of inner peace and joy I felt walking in the footsteps of St Francis in Assisi. He had pierced my heart with a need to help others like he did and transformed my mind to look for God’s beauty in everything that surrounded me. It was in an artist’s gallery in the cobble-stoned streets of Assisi that I caught sight of this painting of my beloved icon – the apotheosis of simplicity and humility that I so lacked and craved for in my life.”

Hailing from the tiny city-state of Singapore, Olive co-founded SD Care in 2012 after completing her Masters in Healthcare Management at the University of Surrey. As part of her postgraduate training, she worked at the Eashing Ward for the Elderly at the Royal Surrey Hospital NHS Trust in Guildford, Surrey. Her work with vulnerable adults began soon after she completed her Bachelor’s degree in Social Sciences from Curtin University in Perth, Australia. In all, she has accumulated more than 3 decades of experience in social care and nursing in 3 countries – Singapore, Australia, and the United Kingdom. She brings diversity and different cultural perspectives to the work she does. Olive communicates in several languages including Mandarin which she speaks fluently. 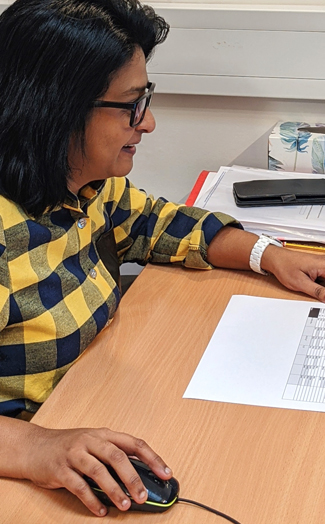 …I found my happiness in helping people, helping others, especially the elderly and vulnerable in society. It has always made me feel good.”

Hailing from the tiny city-state of Singapore, Olive co-founded SD Care in 2012 after completing her Masters in Healthcare Management at the University of Surrey. As part of her postgraduate training, she worked at the Eashing Ward for the Elderly at the Royal Surrey Hospital NHS Trust in Guildford, Surrey. Her work with vulnerable adults began soon after she completed her Bachelor’s degree in Social Sciences from Curtin University in Perth, Australia. In all, she has accumulated more than 3 decades of experience in social care and nursing in 3 countries – Singapore, Australia, and the United Kingdom. She brings diversity and different cultural perspectives to the work she does. Olive communicates in several languages including Mandarin which she speaks fluently. 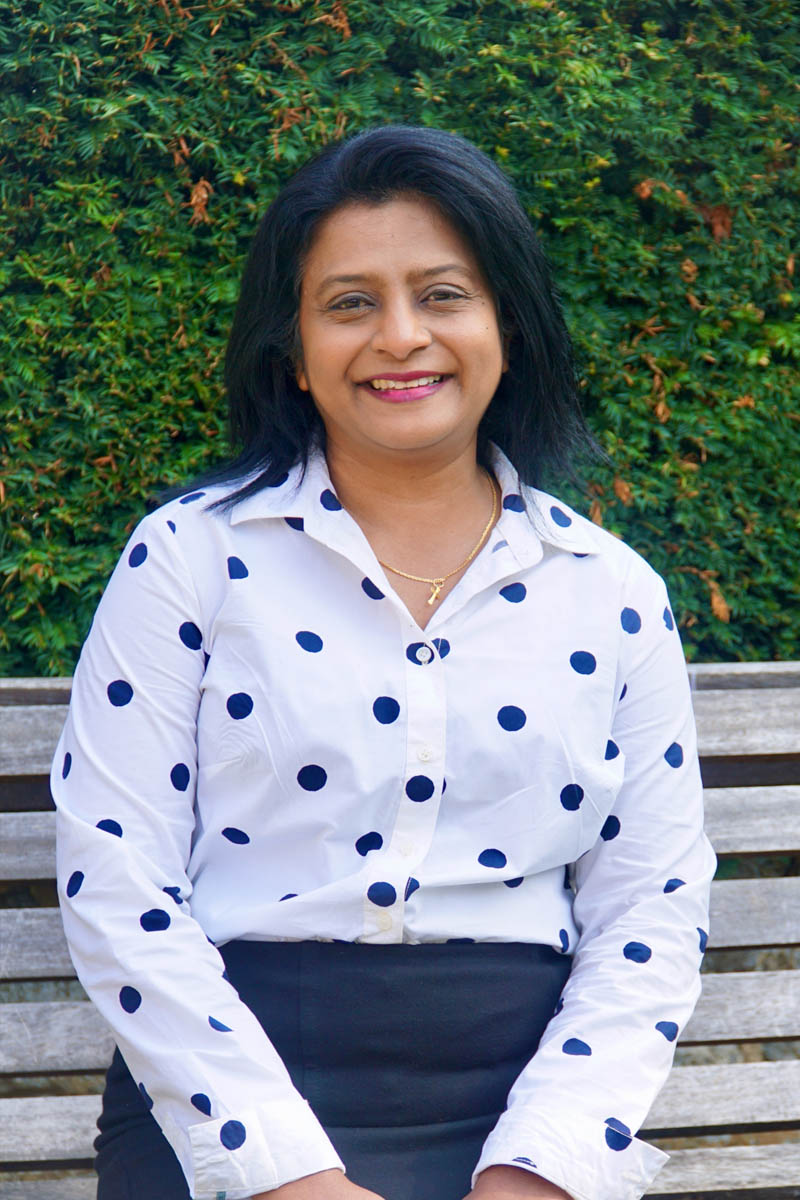 “The Franciscan model is Franciscan care… not just physical, but emotional as well…

…giving them happiness, and giving them that will to fight on, not just for themselves, but for their families… for the carer who sits with them, and tells stories and laughs with them, and is there for them in the middle of the night when they are frightened…”

“From that cavern that was a furnace of glowing gratitude and humility, there came forth one of the strongest and strangest and most original personalities that human history had known.”

A Call to the Soul

The founder, Francis Mirandah has always admired St Francis of Assisi as his icon. He adopted the Franciscan healthcare model not least because it has inspired renowned healthcare institutions such as the Mayo Clinic and Wheaton Healthcare. Closer home the Mount Alvernia Hospital Guildford was founded and run by Franciscan nuns from 1935 till it was sold to BMI.

“It was a call to the soul that brought me to the sanctuary of San Damiano, hidden in the hills of Assisi in the picturesque Umbrian countryside. A simple place that speaks to one in a silence that you can listen to. For it was here that the figure of the crucified Christ called St Francis by name. It was also here where he composed Canticle of the Creatures.”

The Mayo Clinic offers tremendous insight into how a healthcare business modelled on Franciscan values can be run successfully.

Mayo Clinic is an American non-profit academic medical centre currently based in three major locations: Rochester, Minnesota; Jacksonville, Florida; and Scottsdale, Arizona, focused on integrated patient care, education, and research. It employs over 4,500 physicians and scientists, along with another 58,400 administrative and allied health staff. The practice specializes in treating difficult cases through tertiary care and destination medicine. It is home to the top-ten ranked Mayo Clinic Alix School of Medicine in addition to many of the highest regarded residency education programs in the United States. It spends over $660 million a year on research and has more than 3,000 full-time research personnel. (Wikipedia)

We aspire to operate an ethical business model which puts humility and compassion to our fellow men and women above all else. We recognise that all people are created equal with a right to be treated with dignity and respect. To this end, our cause is dedicated to improving the human condition and quality of life so that all of mankind can appreciate the unfolding beauty and joy of Creation.

We are neither a charity nor a foundation as we believe that true entrepreneurial activity can be directed to serve a higher mission than traditional business aims.

One cause that we have dedicated is to provide both moral and financial support to a Carmelite Community involved in missionary work in the Central African Republic (CAR) amongst other good causes. Although the country has abundant natural resources such as diamonds and uranium, it remains among the 5 poorest countries in the world.

The Carmelite Community and Missions

The first Discalced Carmelite missionaries left for the Central African Republic in 1971 from Arenzano. Since then, Italian, Indian, Czech Fathers, Carmelite and Franciscan Sisters and numerous lay volunteers have worked there. In the last forty years, six missions have been carried out in the north-west of the country, six dispensaries, a leper hospital, a center for undernourished children, a mechanical school, a carpentry cooperative, twenty-four schools and ten village kindergartens.

The missions reach another 120 villages scattered in the savannah along hundreds of kilometers of red earth tracks. There is no railway and the paved roads do not reach a total of 1,000 km. Some villages are still reachable only on foot.

The work of the missionaries is supported by the Carmelite Mission Office which has its headquarters at the Shrine of the Child Jesus in Arenzano. Here material and financial aid are collected and the containers that are sent to the Missions every year leave from there.

Each of the projects that the mission carries out in the Central African Republic concerns a particular problem in the pastoral or social field which missionaries have to face every day and which they cannot solve for lack of means. If you wish to donate directly to this cause, please please go to the donation page for Amicizia Missionaria.